2022 has already been a rough year for the stock market. Impending interest-rate hikes in the U.S. coupled with geopolitical tensions have motivated investors to exit growth stocks in droves. Many tech giants that face company-specific headwinds have fallen even harder than the broader market.

But amid all this volatility, investors can find beaten-down stocks that have the potential to rebound and deliver market-shattering returns in the long run. Let’s look at two such stocks that are close to their 52-week lows: PayPal (NASDAQ: PYPL) and Chegg (NYSE: CHGG).

PayPal’s value has been cut almost in half since the beginning of the year — a terrible performance by any metric. While it was feeling the pressure even before releasing its fourth-quarter earnings report, the company’s financial results exacerbated the rout. PayPal didn’t perform nearly as well as investors and analysts expected on several fronts, and the company’s guidance was weak.

One key metric that scared investors was the company’s net new active accounts (NNAs). During fiscal year 2021, PayPal recorded 48.9 million NNAs and ended the year with 426 million active accounts, representing 13% year-over-year (YOY) growth. However, in its third-quarter earnings report, PayPal had guided for 55 million NNAs for the year, so it came up short of its projections by a pretty wide margin.

To make matters worse, of the 9.8 million NNAs in the fourth quarter, roughly 3.2 million came from its acquisition of buy-now-pay-later company Paidy. This $2.7 billion cash transaction closed in October. 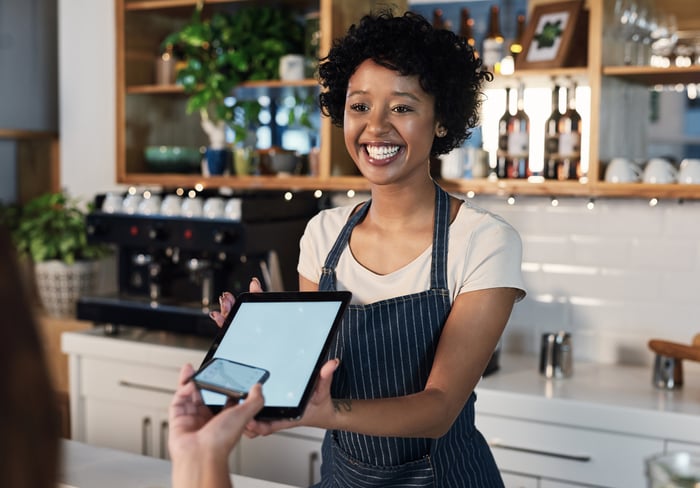 But things are looking up, starting with that Paidy acquisition. The buy-now-pay-later trend is gaining steam. As the name suggests, consumers can purchase items and pay for them later, often free of interest. Paidy is headquartered in Japan, the world’s third-largest e-commerce market.

This acquisition will help PayPal access this lucrative opportunity. Meanwhile, the company’s Venmo started a partnership with Amazon this year and allows Venmo users to pay for goods on the online retailer’s main U.S. website or shopping app. PayPal’s long-term goal is to enter similar partnerships with many other companies and remain a leading digital wallet.

The fintech industry will continue to grow at a good clip. PayPal estimated its addressable market stands at $110 trillion. While PayPal won’t capture this entire pie all by itself, it will almost certainly continue to make headway within its industry. After falling so much this year, PayPal looks like an excellent stock to buy.

Chegg’s shares have dropped substantially in the past year as it became clear that the learning platform’s pandemic tailwind was coming to an end. The company’s fourth-quarter results were not impressive, which management anticipated. Chegg’s revenue was $207.5 million during the fourth quarter, a meager 1% increase compared to the prior-year quarter.

The company’s net income clocked in at $24.3 million, decreasing from the $26 million in profit it recorded during the year-ago period. Chegg Services — its subscription segment that accounts for the bulk of its top line — reported $187.2 million in revenue, 6% higher than the year-ago period. Chegg Services subscribers totaled 7.8 million as of the end of the year, an 18% YOY increase.

Chegg was already going to face difficult YOY comparisons last year as its services were in such high demand in 2020. Even so, there are two reasons Chegg is primed for a comeback. The first is the company’s competitive edge: the network effect. Through its subscription service, Chegg offers textbook and homework solutions, typically prepared by subject matter experts.

Second, Chegg still boasts a long runway for growth. The company estimates a potential market opportunity of 100 million students worldwide who could benefit from its services. Currently, it has a tiny fraction of that. In the coming years, subscriber growth will work wonders for Chegg’s top and bottom lines.

While the near term may remain a bit iffy for the company due to its recent financial missteps, patient investors will be rewarded down the road. That will especially hold true if they jump on board now, given how much the company has fallen over the past few months.

10 stocks we like better than PayPal Holdings
When our award-winning analyst team has a stock tip, it can pay to listen. After all, the newsletter they have run for over a decade, Motley Fool Stock Advisor, has tripled the market.*

They just revealed what they believe are the ten best stocks for investors to buy right now… and PayPal Holdings wasn’t one of them! That’s right — they think these 10 stocks are even better buys.