Data collection is common nowadays. Governments monitor your online activities. ISPs collect your data to throttle your connection speed or make a profit by selling it to advertisers. One aim of the data collection done by companies is to potentially target the sale of goods or services. Not to mention hackers, your online data is their cash cow.

A VPN protects your data from being tracked by authorities and ISPs and makes it difficult for advertisers and hackers to spy on your moves online.

A lesser-known PandaVPN earns our Editor’s Choice award. Headquartered in Seychelles, PandaVPN is a trusted one. This VPN uses ECC encryption algorithm and OpenVPN protocol to safeguard your online traffic. It has a surprisingly huge server network spread around the world, all with impressively fast speeds.

The following PandaVPN review will show you more details about its server network, speed, security, privacy, compatibility, and price.

As a new VPN, PandaVPN has a surprisingly large server network all over the world.

It has the best coverage in Europe, especially in Switzerland, Germany, France, Spain, Italy, Netherlands, Turkey, and the UK. Asia comes second with the most PandaVPN servers in Japan, Korea, Singapore, HK, Taiwan, Thailand, India, etc. Followed by Americas, the US, Canada, Brazil, etc., have the most servers.

Notably, there are as many as 25 servers in the US, covering the states of Los Angeles, Las Vegas, Washington, San Francisco, New York, Seattle, Atlanta, Dallas, Miami, etc.

Plus, the VPN provides servers in the Middle East (UAE, Jordan, Egypt, and Israel) and Africa (Kenya, Suid-Afrika, and Nigeria), a continent ignored by most other VPN providers.

Such an extensive server network ensures that no matter where you are, you can find a server that is close to you. The closer the VPN server is, the faster speed you can get. That’s probably one of the reasons that PandaVPN can offer excellent speeds.

VPN speeds are influenced by many factors and vary in different server locations, your original internet speeds, the condition of your hardware & firmware, and also the server load. If there are too many people connecting to one server at the same time, the speed drops as well.

PandaVPN is able to offer users great speeds once a proper server is selected. Through speedtest.net, we tested its servers in Seattle (USA) and Hong Kong.

Connecting to an HK server, we got a speed of 398.94Mbps for downloading and 119.31Mbps for uploading.

Connecting to a US server, we got a speed of 352.67Mbps for downloading and 79.95Mbps for uploading.

Split tunneling is also supported, which enables you to customize what apps/sites to use or not to use VPN, helping boost the speed and performance of VPN in another way.

PandaVPN is headquartered in the Republic of Seychelles. It is outside the 5, 9, and 14 Eyes Alliance intelligence sharing range, so it’s generally considered a privacy-friendly country.

This VPN uses ECC encryption to protect users’ connections, which is not common in the VPN industry. But it’s safe enough to keep off intruders.

PandaVPN supports two security protocols. OpenVPN is one of the most secure protocols available and is widely used in the VPN industry. Shadowsocks delivers fast speeds, which is perfect for streaming or gaming. But if you want stronger privacy, switch to the OpenVPN protocol.

This VPN keeps no log of user identifying information. Instead, it automatically generates a string of random numbers as your login credentials. During the whole signing-up process, you don’t need to provide a profile name and email address. PandaVPN also doesn’t collect users’ browsing history and downloaded files.

On top of that, PandaVPN supports Bitcoin payment, which makes it more private.

To unblock streaming services, you can connect to its dedicated streaming servers. Through our testing, we can smoothly watch Netflix, HBO, Hulu, and Disney+ as we switch to the Global Mode and OpenVPN Mode.

As for torrenting, there are also dedicated servers for torrenting. You can switch back and forth from the routing methods it supports. We successfully opened the Private Bay, RARBG, YTS, etc. Some review sites say that PandaVPN can’t open any torrenting sites. To be honest, it’s unfair.

For gaming lovers, PandaVPN offers some gaming-optimized servers. You can unblock the games that are banned in your countries and get a better gaming experience.

PandaVPN has a user-friendly interface and it’s easy to use even for VPN newbies. There is a Smart Connection Mode that will automatically connect you to the best server with the least load at that time. You can also easily switch to other routing modes like the Global VPN Mode or OpenVPN First Mode. 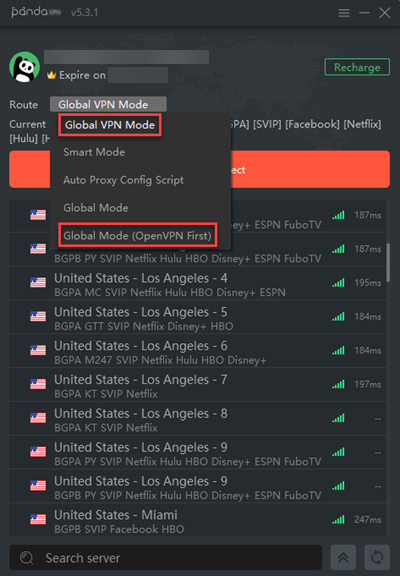 If you have a target server, you can easily find what you want from the server list in which all PandaVPN servers are organized by geography. Alternatively, you can directly search for your target server in the search box at the bottom.

If you want to do streaming or torrenting, it’s a piece of cake too. As you can see, there are dedicated server groups for BitTorrent, Streaming, and Gaming.

PandaVPN supports all main OSs, including Mac, Windows, Android, iOS, Linux, and Android TV. Your online traffic will be safe with PandaVPN across all popular platforms.

PandaVPN allows you to connect up to three devices at the same time. But you can tailor your subscription plan and increase the number of simultaneous connections.

The 2-year plan costs $2.77 per month. You buy one year and get an extra one year of service for free. It’s an 81% off discount. Pay attention that during most holiday seasons, there are bigger discounts. Pay more attention to their official website and don’t miss the offer if you’re interested.

All plans have a 7-day money-back guarantee. If you’re not satisfied with this VPN or its service, you can contact customer service to cancel your subscription.

Gaming gift cards and vouchers: How to find the best deals