Britain has the fifth most affordable broadband of any country in the world relative to people’s incomes, according to new figures.

The average broadband connection costs £26.39 per month according to comparison site Uswitch.

The only countries where getting online is more affordable are Israel, Lithuania, France, and Luxembourg.

With the average monthly income in the UK sitting at £2,266, broadband bills account for 1.16 per cent of the average Briton’s salary.

Getting online: Britain doesn’t offer the cheapest broadband deals in the world, but prices are competitive. The typical connection costs 1.16% of the average person’s monthly income

Fast and affordable broadband has become increasingly vital over the last few years with more Brits being able to work from home for some of the time.

Catherine Hiley, broadband expert at Uswitch, said: ‘It’s fair to say that we have become increasingly dependent on reliable broadband over the last few years.

‘While many people have made the switch to working from home, a record number of people have turned to the internet to stay entertained and connected.’

Where is it most expensive to get online?

Uswitch found Israel to be the most affordable country when it comes to broadband packages with an average cost of £18.67 a month – taking up just 0.78 per cent of a person’s average monthly income.

While offering a lower average monthly broadband charge at £10.13, Lithuania comes in at second place as it accounts for 0.97 per cent of income where people earn on average £1,043 a month.

Meanwhile Colombia’s broadband ranked as the most expensive. There, broadband providers charge an average of £18.69 – but it still ranks poorly as it takes up 5.63 per cent of Colombian users’ income, as average earnings in the country are very low.

While Britain is not the cheapest overall, there are deals which undercut the average price.

Plusnet comes a close second with its Unlimited Broadband and Phone Line deal at just £18.99 – a shave over Israel’s average.

UK lacking when it comes to broadband speed

As well as average broadband costs, Uswitch’s research also analysed median download speeds – and the UK did not rank nearly as well as it did on price.

It found that Chile offered the fastest internet speeds overall at 189.36 megabits per second (Mbps).

In this category the UK did not make the top five, ranking just 26th overall for average broadband speed at just 61.69 Mbps.

Uswitch said that Chileans would need just over a minute to download a 1,500 MB HD film, while Brits would have to wait three minutes and 15 seconds to download a file of the same size and quality.

Hiley said: ‘It’s interesting to see that the UK ranks only 26th for median download speed, averaging less than the top-ranking country, Chile.

‘These figures demonstrate that the UK still has a long way to go in terms of offering fast and reliable speeds.’

According to Uswitch the fastest broadband currently on offer is with Virgin Media which offers 1.13Gbps (gigabit per second), through its Gig1 Fibre Broadband deal.

But the UK is not the slowest provider by some distance. Languishing near the bottom is Turkey with a media download speed of just 26.34Mbps.

Hiley added: ‘That’s around seven times slower than Chile and would take two hours to download a standard HD film.’

Deals offering vouchers and other perks

The best speed or the cheapest deal may not always be a priority, however, with many seeking a deal that offers a bit of both.

And some broadband providers offer other perks like shopping vouchers for those that sign up, which may be preferable for some customers.

However, they are urged not to sign up to a deal for the vouchers alone and still make sure that the broadband they are getting meets their speed and price requirements. 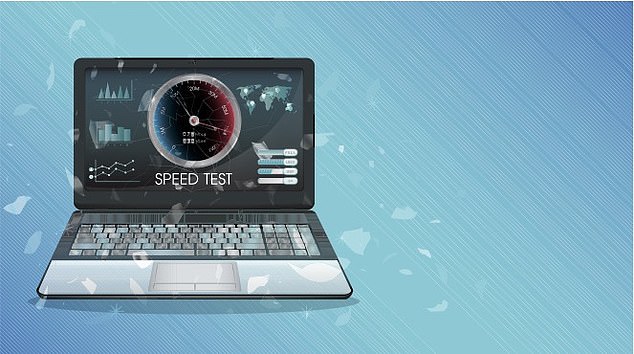 Check your speed needs: You could overpay for something that doesn’t meet your usage needs Uswitch warns

For those looking for something slightly cheaper, TalkTalk offers a £80 gift card through its Unlimited Fibre 65 and Phone Line deal at £23.50 per month.

Whether they are looking for cheaper deal, faster speed or a voucher perk, customers can often benefit from switching.

There may be an exit fee to pay if they leave their existing provider before their fixed-term contract is up.

However, some providers will offer to pay this fee for switchers, and it is also possible to switch without penalty within 30 days if your provider increases your monthly bill.

Hiley said: ‘With a reliable connection quickly becoming a fundamental backbone of almost every aspect of life, the need for seamless broadband connectivity grows even stronger.

‘If your own broadband isn’t up to scratch, or you feel like you’re overpaying, then compare ultrafast broadband deals to determine your options.’

Get the best broadband deal: Five tips for switching and saving

1. Be realistic on price: A Uswitch spokesperson says: ‘Most contracts last for 12, 18 or 24 months, so budget wisely to ensure you can afford the desired package for the entire term.’

2. Get the speed right: Uswitch says: ‘You could end up overpaying for a package that doesn’t suit your current usage. Run a speed test to see how fast your current connection is. If you’re happy with the performance, then consider whether a faster, and potentially more expensive deal, is worth it.’

3. Assess how long you want the contract for: Uswitch says: ‘Two years is a long time, so be confident that you’ll see out the package until the end of the term. If you plan to move house in a year or 18 months, consider a package that fits with your schedule.’

4. Don’t be swayed by perks. Uswitch says: ‘Some packages come with additional benefits such as gift cards or vouchers, so if you’re an avid shopper then these could be a great perk. Be mindful that you don’t get swayed into a contract solely based on added extras though, as you need to ensure the overall price, speed and length of contract is suitable for you.’

5. Compare deals: Comparison websites like Uswitch, Comparethemarket, and Moneysupermarket, for example, offer a wide range of deals that you can compare and tailor to your requirements.

Uswitch adds: ‘There’s often exclusive deals to be had through comparison sites too, so keep an eye out for limited time offers.’

Some links in this article may be affiliate links. If you click on them we may earn a small commission. That helps us fund This Is Money, and keep it free to use. We do not write articles to promote products. We do not allow any commercial relationship to affect our editorial independence.

Previous articleYou can get FREE Starbucks with 8 little-known sites
Next articlePayPal Vs. Stripe Comparison 2022 – Forbes Advisor

The popular Powerbeats Pro earbuds are $70 off on Amazon today

If you’re receiving a large gift of money...

One of World Cup history's most famous rivalries,...

Flu cases are exploding all over New Jersey.The...

Are you stuck in a rut knowing what...

If you’re receiving a large gift of money...

One of World Cup history's most famous rivalries,...

Flu cases are exploding all over New Jersey.The...