Piper Sandler has announced the results of its 43rd semi-annual Generation Z survey of 7,100 U.S. teens.

The ‘Taking Stock With Teens – Spring 2022’ survey found that 87% of teens own an iPhone and 87% expect an iPhone to be their next phone. Additionally, 72% of teens already have AirPods.

Apple Pay ranked as the most popular payment app; however, this is partly due to the high penetration of iPhone among teens surveyed.

Check out some of the other key findings below…

Brand & Preference Rankings:
● 53% of teens cite Amazon as their No. 1 favorite e-com site (-300 bps Y/Y); Importantly, Amazon decreased from 47% share to 35% Y/Y among upper-income females
● Nike is the No. 1 apparel brand for teens & LULU gains 300 bps Y/Y; Nike is the No. 1 footwear brand—up 400 bps Y/Y
● Athletic brands mindshare accounted for 44% of teens’ favorite apparel brand – the most ever in our survey by 300 bps
● Crocs increased from the No. 8 preferred footwear brand to No. 6 while Hey Dude is in the top 10 for two consecutive surveys
● Vans lost 400 bps of mindshare as a favorite footwear brand and 600 bps of share among upper-income teens
● e.l.f. rose to the No. 1 preferred makeup brand for all teens for the first time–-gaining 300 bps Y/Y and displacing Maybelline
● Ulta remained the No. 1 preferred beauty destination with 48% mindshare (46% LY) while Sephora remained at No. 2 and ceded 400 bps of share
● Olaplex was the No. 1 preferred haircare brand among females with 11% mindshare and 15% share among UI females
● Chick-Fil-A is No. 1 restaurant; Chipotle No. 3 gained 300 bps of share to 8% (vs. 5% LY); Starbucks remained No. 2 at 11% mindshare
● Teens’ interest in plant-based meat is slipping; 43% consume or are willing to try it, down from 49% in spring 2021
● 87% of teens own an iPhone and 87% expect an iPhone to be their next phone; 72% of teens already have AirPods
● Teens spend 30% of their daily video consumption on Netflix and YouTube (both 30%); HBO Max gained share
● TikTok is the favorite social media platform (33% share) surpassing Snapchat for the first time (31%); Instagram was again third (22%)
● Russia’s invasion of Ukraine was the most important political or social issue — combining gas prices and inflation results in 14% mindshare, enough to displace the Russian/Ukraine situation

You can request the full report from the link below… 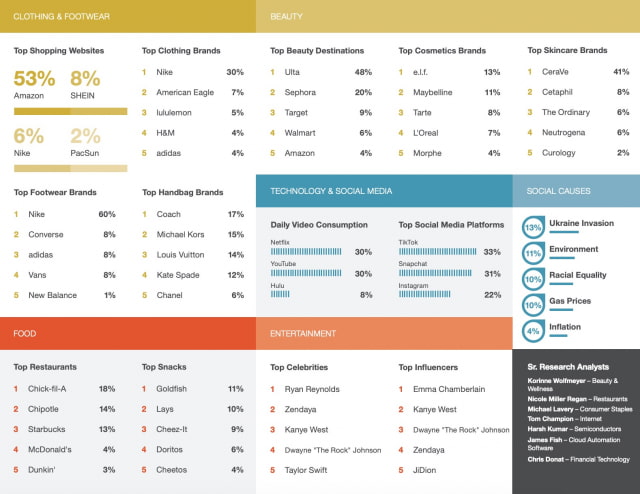 Previous articleWatch now: Illinois State University to be featured in Amazon Prime series | Local Education
Next articleWhat Is Shadowsocks, and How Does It Work?

Gaming gift cards and vouchers: How to find the best deals