Technically, a stock split doesn’t change anything about the value of a company or its shares. One common argument supporting them is that a lower share price can allow more retail investors access to the stock. But now that many brokers offer fractional shares, even that isn’t really an issue.

It is probably true that a stock split is a signal of confidence by management. It’s unlikely a company would initiate one if its near-term business outlook wasn’t solid. But there can also be a benefit that isn’t discussed very often. And Amazon ( AMZN -0.88% ) may just be following Apple‘s successful playbook with its recent 20-for-1 stock split announcement.

Andy Jassey took over the CEO role at Amazon in July 2021 from legendary founder Jeff Bezos. Though under different circumstances, the change was reminiscent of when another tech titan brought in a new CEO to fill the shoes of its founder. Tim Cook took Apple’s CEO job in August 2011, at a time when the company was firing on all cylinders. The iPhone 4S was released in 2011 with the brand-new Siri voice assistant and upgraded camera technology, among other features.

Sales soared, and Apple investors reacted by driving the stock up to a split-adjusted high of about $700 per share by fall 2012. The products, however, were developed under the leadership of the late Steve Jobs, and Tim Cook began to receive criticism as Apple shares then plunged more than 40%.

But the company enacted a 7-for-1 stock split a year later. As the Tim Cook era then began in earnest, investors now can look back on wildly successful stock returns since that time, as shown in the chart. 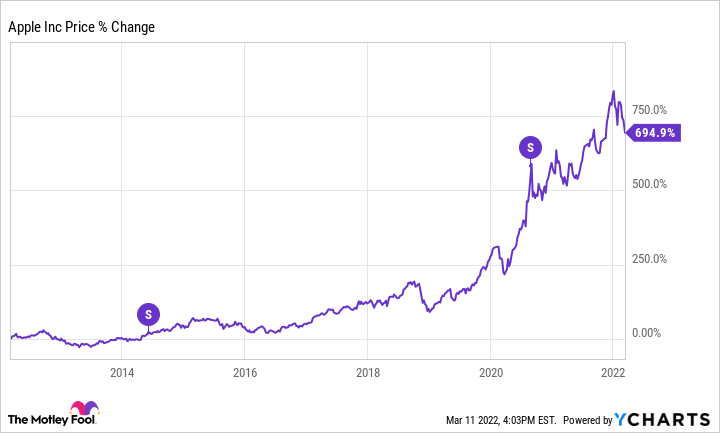 Why it matters for Amazon

When Apple’s stock sank under Tim Cook’s early leadership, investors wondered when, if ever, he could help the stock get back to its former high of $700 per share. Similarly, Amazon shares hit an all-time high of more than $3,700 per share in the same month Andy Jassey took the reins.

With shares now about 20% below that level, this stock split provides a reset for Jassey and how investors view his tenure relative to the share price. In effect, he won’t have to listen to investors bringing up a $3,700 share price bar for him to clear. That helps him steer how he communicates with investors and provides him a new slate.

Along with the stock split, Amazon announced its board has also authorized the repurchase of up to $10 billion of its common stock. One of Amazon’s big cash-producing businesses is Amazon Web Services (AWS), which Andy Jassey led prior to his promotion to CEO. 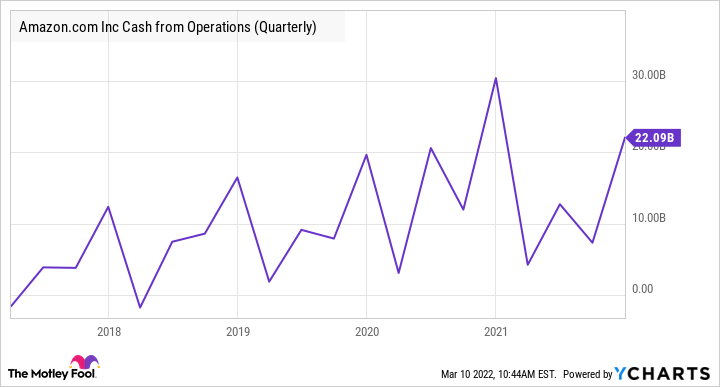 The company has been using much of that cash to reinvest in several aspects of its business, most notably for logistics-related areas like distribution centers and fleets of aircraft and trucks for transportation. The buyback announcement may signal that those investments are on the decrease, allowing more operating cash to go to investors.

While it’s true that a stock split in itself doesn’t change any business fundamentals, the one Amazon just announced could be more meaningful for investors. If nothing else, it provides a clean slate for a new CEO that has big shoes to fill. That same situation worked out well in the long run for investors in Apple.

This article represents the opinion of the writer, who may disagree with the “official” recommendation position of a Motley Fool premium advisory service. We’re motley! Questioning an investing thesis – even one of our own – helps us all think critically about investing and make decisions that help us become smarter, happier, and richer.

Previous articleScamwatch: It can be hard to say no to a cute puppy but don’t rush in and fall for a scam | The Canberra Times
Next articleCustomers demand refunds as company promoting Showground events goes under

How To Receive Free Money? 4 Ways To Get Some Cash

A MUM-OF-THREE who gave away "every...

When Everton FC’s players ran out to face...

A MUM-OF-THREE who gave away "every...